One of my most visited posts is an exploratory one I wrote years ago while I was at NYU Florence and examining the role of Italy in colonial rule. The most common search term that brings visitors to this post is, “Did Italy ever colonize Africa?” The answer is that it certainly tried but without nearly the success of its European neighbors.

Italy was so poor at the colonization race because it simply arrived too late to be able to compete with the firmly established empires that were already occupying most of Africa.  Italy did not become united as a country until 1861, and by then European colonizers had already been exploiting African peoples and resources for centuries.  At this time Italy barely knew how to govern itself, let alone far away foreign lands.

There was a resurgence in the idea of an Italian Empire during WWI, a war during which Italy secured its stronghold in Libya particularly.  There existed popular rhetoric of nationalism, in which interlocutors described Libya as still part of the ancient Roman Empire, and by extension of that as being part of Italy. Giovanni Pascoli, a great nationalist writer, stressed the importance both in his written works and speeches of forging an expanded national identity through conquest and praising of the proletariat. Yet still, Italy could never quite catch up with other Europeans in the colonization of Africa.

Mussolini‘s regime sought to regain a foothold in Africa starting in the 1920s, and did so with his conquering of Ethiopia 1936 when he declared an official “Italian Empire.” However, WWI had depleted the resources of the Italian government and Mussolini failed to understand realistically what was necessary to successfully maintain rule over African colonies. It was only a matter of time before his fascism was brought to an end, and WWII created such reverberating changes in the European-African relationship that Italy essentially no longer had any power in Africa by the end of the War.

In The Conversation, I came across an excellent and well-detailed account of Italian defeat in Ethiopia, “The battle of Adwa: an Ethiopian victory that ran against the current of colonialism“. and wanted to share it here since there was so much response to my initial post. The author, Yirga Gelaw Woldeyes of Curtin University, explains the importance of Ethiopian victory during the battle of Adwa, a time when almost no indigenous African forces were able to compete with the ossified armies, technology, and finances of Europeans: 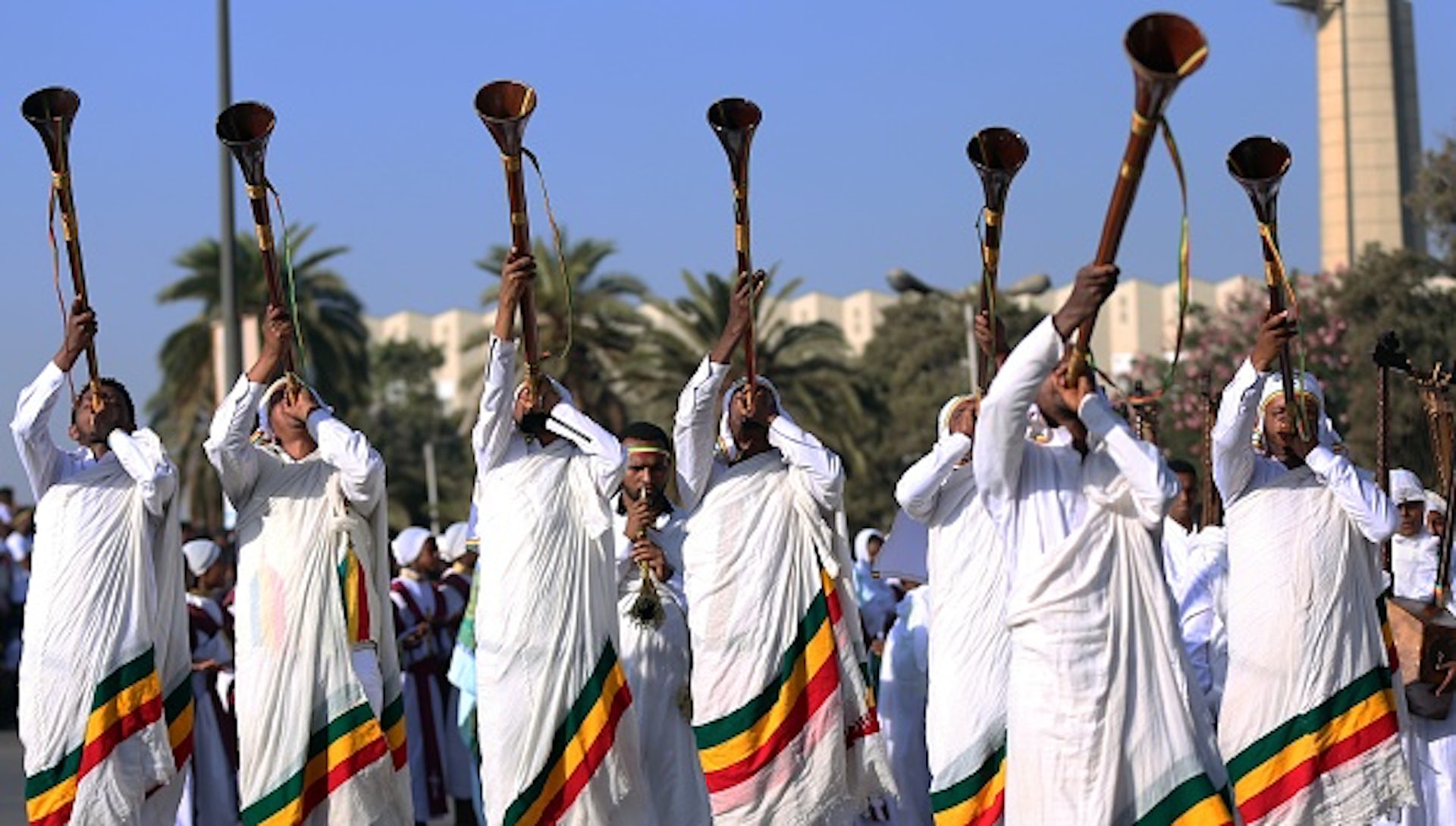 On the first day of March 124 years ago, traditional warriors, farmers, and pastoralists, as well as women, defeated a well-armed Italian army in the northern town of Adwa in Ethiopia. The outcome of this battle ensured Ethiopia’s independence, making it the only African country never to be colonized. Adwa turned Ethiopia into a symbol of freedom for black people globally. It also led to a change of government in Italy.

The town of Adwa is located in Northern Tigray, closer to the southern border of Eritrea. Yeha, the capital of Ethiopia’s ancient empire from 980-400 BC, and the monastery of Aba Garima, which was founded in the sixth century AD, are located near the town.

The battle between Ethiopia and Italy took place in the mountainous terrain of the area.

Adwa still stands as witness to what ordinary Africans can do when they come together as farmers, pastoralists, women and rural people, workers and artists. They are able to score a decisive victory against global colonialist forces.

Ethiopia’s place in the world

Since the beginning of slavery and colonialism in the 16th century, similar battles had occurred around the world. The outcome of every war was the same. Europeans ended up ruling the native peoples of the Americas, Africa, Asia, and Australia.

Ethiopia stood as the antithesis of the colonial worldview. Regarded as the origin of humankind, it was, according to Harvard professor Ephraim Isaac

about 10,000 years ago, one single nation or community of a single linguistic group.

The people spoke an Afrasian language, which is the origin of almost all languages currently spoken in Ethiopia, Eritrea, and Somalia.

Ethiopians developed the Geez or Ethiopic writing system. From the fourth century, an indigenous Christianity, Orthodox Tewahido, developed through the synthesis of belief in the Ark of the Covenant, the gospel and ancient traditional practices.

The Kebra Nagast, the national epic that elaborates this belief, provided the basis for the emergence of a Solomonic dynasty that incorporates diverse lands and cultures into one country. Muslim immigrants were welcomed and protected by the Christian king in the seventh century.

In the 19th century, the three successive kings, namely Emperor Tewodros of Gondar, Yohannes of Tigrai and Menelik of Shoa, sought to centralize power.

The road to Adwa

A decade before the Battle of Adwa, European powers had decided the fate of Ethiopia. At the Berlin Conference of 1884-5, 14 European countries divided Africa among themselves. Before the conference, only about 10% of Africa was controlled by Europeans; the remaining 90% was ruled by indigenous and traditional rulers. Italy had a colonial possession over Assab port since 1882. At the Berlin Conference, European colonial powers agreed that Italy could take over Ethiopia as its future colony.

Italy expanded its presence in the Red Sea, an area that had become important since the opening of the Suez Canal in 1869. With British support, Italy took control of the port city of Massawa in 1885. From Massawa, Italy moved slowly inland, leading to a number of clashes with locals, which culminated in the battle of Adwa. Italy suffered heavy defeats but this didn’t deter them.

Italy’s expansion across Ethiopia was facilitated by the devastation caused by rinderpest – an infectious viral disease – that killed up to 90% of the country’s livestock. Famine and disease wiped out a third of the population between 1888 and 1892. This period is regarded as Kifu Ken, evil days.

Italy took advantage of the devastation. It sought to divide and conquer Ras Mangasha of Tigray and Nigus Menelik of Shoa. The Italians eventually signed the Treaty of Wuchale with Menelik in May 1889. The treaty was written in Amharic and Italian. The treaty would later be the trigger for the battle of Adwa. Menelik was to discover that the language in the two versions of the treaty differed. The Italian version effectively made Ethiopia Italy’s protectorate, in contrast to the Amharic version.

As the tragic devastation of the Kifu Ken eased, Menelik began preparing for war against the Italians. On 27 February 1893, he renounced the Treaty of Wuchale. He then ordered the creation of food depots at major towns along the way to Adwa for the upkeep of his army. The Italians fortified their positions in Tigray, attacking Mangasha at Coatit on 13 January 1895.

On 17 September 1895, Menelik declared a total mobilization of war against Italy. He called on all Ethiopians to defend their country, family and religion. He ordered every capable person to fight and those incapable to pray for Ethiopia’s victory.

Ethiopians from every tribe, culture, and community answered Menelik’s call. Regional leaders from diverse ethnic and cultural backgrounds responded unanimously creating an army of 100,000. They had inferior weapons but a strong cause.

The first showdown occurred at Amba Alagi on 7 December 1895, where a relatively smaller Italian army was wiped out. The second encounter was at Mekelle, where the Italians were stationed behind a strong fort. The Ethiopians surrounded the Italians for two weeks and, upon Empress Tayitu’s advice, cut off the fort’s water supply.

The Italian commander agreed to surrender if they would be allowed to leave with their firearms. Menelik agreed that they could leave the garrison unharmed.

But the Italians remained in their strongholds, fortifying their position at Adigrat and Sauria. Menelik was not in a hurry to attack these forts.

After two weeks of inactivity, General Baratieri decided to advance for a surprise attack. It was 1 March 1896, or, according to the Ethiopian calendar, Yekatit 23, 1888, the day of Saint George. The priests carried the Tabot, a replica of the Ark of the Covenant, a religious icon that symbolizes the sanctity of Ethiopia, to the battlefield. The 20,000 Italian and Italian-trained native troops who advanced in three columns fought bravely with their cannons and machine guns before facing a decisive defeat. Causalities were severe on both sides.

One of the key leaders of the Ethiopian forces was Etege Tayitu Bitul, wife of Emperor Menelik. A fearless strategist and brilliant administrator, she led 6,000 cavalries to the war front, and employed traditional music and war chants that motivated the fighting spirit of the warriors.

The Adwa victory led to a change of government in Italy. Due to public protest and failure of his colonial policy, Prime Minister Francesco Crispi resigned.

Negotiations between the two countries resulted in the Addis Ababa Treaty. One of its key components was the unconditional acceptance of Ethiopian independence and sovereignty.

News of an African victory spread throughout the world.

Look to Africa for the crowing of a black king. He shall be the redeemer.

The green, yellow and red Ethiopian flag was adopted by several African countries after colonial liberation and a universal national anthem was created for black people.

Follow African Society and Conflict on WordPress.com
Join 890 other subscribers

Join 890 other subscribers
Follow African Society and Conflict on WordPress.com