During one of my interviews recently, I spoke with a wonderfully open elderly woman whose husband had fought in WWII. She told me that he traveled by foot from his village in the Niger Delta, in present day Rivers State, to the port city of Calabar to board a boat for Europe around 1940. As the youngest of many children, going to war was the best opportunity he had of gaining employment. I have read about the million or so African troops who fought in WWII on the side of the Allies. West African soldiers, including many Nigerians, were instrumental in liberating Ethiopia (the only African country to successfully resist colonization) from fascists. I have known that the British offered inducements to subjects in their African colonies to convince them to fight in Europe against Germany, of course in worse conditions and for less pay than their white counterparts.

However, I was surprised when the widow told me that her late husband fought on the side of Hitler. I reworded the question several times and she seemed certain that he had been employed by the Germans during WWII. Perhaps she is confused, as she was just a child during the war, but if she isn’t, then that is very intriguing. I have done some follow up reading and found that Nazi violence was directly almost totally against Jews and gypsies and less against Blacks in Europe. Although Nazi doctrine indeed preached the inferiority of Blacks, they were not enough of a political or economic threat to merit the systematic killing that Jews suffered. So, perhaps the utility of African troops would have justified their employment by Nazi Germany? For a politically conscientious Nigerian soldier, a German victory may have seemed to be a way to weaken Britain, thus increasing the chances of Nigerian independence.

Regardless of which side they fought on, engagement in WWII changed the way most African soldiers viewed their nation and the balance of world power. After the war, they received little compensation or thanks for their service to their European colonizers. This disillusionment combined with their new understanding that their colonial rulers, whether British, French, Portuguese, were not all-powerful. These African men had traveled the world, sometimes fought alongside white comrades, and their political consciousness had changed. They had a deserved sense of entitlement to their own freedom. They would not return home and accept the oppression of colonial rule. The golden year of independence for British colonies, 1960, followed fifteen years after the end of the war.

Here are some of the photos that the widow shared with me.  In the group photo you will see that the seven white men seated in front have kept their hats on, which I presume is a sign of their authority since the others have their caps off.  I am interested in the African sitting in front just to the right of the white men, as he is the only black with his hat still on.  I wonder what his rank was. The date written on this back of this photo was September 6, 1945. The truce was signed on September 2, so presumably this is a photo taken just before soldiers were sent home. 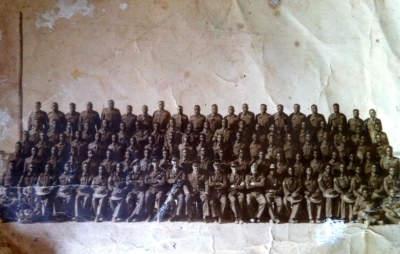 Although it is very blurry, the eight African soldiers in this other photo below were the troops who fought with her husband, who is on the bottom right. 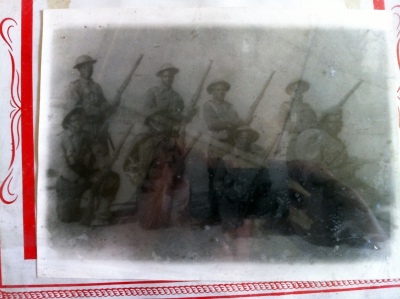 I am not a historian, so can anyone with a stronger background in this history offer any information on the possibility of Africans fighting for the Axis Powers?

3 thoughts on “Nigerians in WWII”

Follow African Society and Conflict on WordPress.com
Join 890 other subscribers

Join 890 other subscribers
Follow African Society and Conflict on WordPress.com