A recent day at the International Criminal Court in The Hague, Netherlands was one of the most professionally interesting experiences I have had.  A Dutch friend took care of the logistics and in hindsight, I realize it was a surprisingly easy thing to do and and any foreigner could also visit. The Hague is the government seat of the Netherlands and just a 45-minute train ride from Amsterdam.  At the main station in The Hague, we rented bikes and peddled over to the Court using the maps functions on our smart phones. We found a surprisingly humble building, but later learned that the current building is an interim premises. Scheduled to open in 2015, the permanent premises designed by a Danish architectural firm will be located at Alexanderkazerne (Alexander Barracks), which will be closer to the detention center and be part of the International Zone of the Hague. 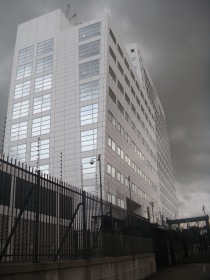 The Court’s lists their schedule on their website, http://www.icc-cpi.int/Menus/ICC/Home, and we chose to attend the hearings of Jean-Pierre Bemba Gombo and were especially interested in that of Laurent Gbagbo.  Bemba is a Congolese former military commander on trial since 2009 for “crimes against the civilian population, in particular, rape murder and pillaging” in the Central African Republic from 2002-2003. The first former head of state to be charged in the ICC, Gbagbo was the President of Cote d’Ivoire and is accused of using murder and sexual violence to try to maintain power after he lost the 2010 election there. We were able to sit in on Bemba’s trial, but for reasons described in my post on the pro-Gbagbo demonstrations, we weren’t able to attend the latter’s pre-trial hearing.

I had expected a busy building, full of shuffling lawyers, judges, and other legal professionals, but that was so in the morning during Bemba’s hearing.  It was virtually empty except for the single guard at the security checkpoint and three employees at the front desk.  A Dutch man and Ghanaian woman greeted us after the security point. They instructed us as to the proper decorum in the public viewing gallery of the court. The rules were what anyone should expect them to be inside a courtroom, including no talking, gesturing, pointing, or use of recording devices. Visitors must also rise when the judges enter and leave the courtroom.

After depositing our bags and valuables in the lockers between the reception and the public viewing gallery, a security guard led us into the gallery.  It was so small, and more exciting for me, we could sit right in the front row just 30 feet from Bemba himself, with nothing dividing us but a wall of glass.  He is a physically huge man, and sat back in the very corner of the room wearing a seat and tie, looking extremely bored. When the two of us sat down he looked at us, probably wondering why we were there.  It happened to be a closed session, so we could watch but could not hear anything (Gbagbo’s later afternoon session was open with audio). For anyone who plans to visit, if you take a seat nearer the door to the gallery, that will put you near the prosecution, and if you walk further into the room, that puts you near the defendant.  I am not sure if that means we were symbolically supporting Bemba since we sat nearer the defense side of the room, support which we obviously had not intended to give, but the far side is certainly a more interesting vantage point to view the accused. Here is the layout of the courtroom that the front desk gave us, and we sat in the top left corner of the Public Gallery squares to see Bemba up close:

It was heartening to see that the three presiding judges were all female and from different regions of the world.  In fact, I was quite pleased with both the gender and geographic balance of the Court. The ICC’s staff of judges seems to be exactly half male and half female, and there is a good number of judges and other legal actors from the global south and smaller countries working at the ICC. (There are no American judges since G. W. “unsigned” Clinton’s signature on the Rome Treaty that founded the ICC and thus the U.S. is not a party.) The prosecution and defense teams, as well as the legal representatives for the victims, are lead by sub-Saharan Africans. The lead Prosecutor is a Gambian named Fatou Bensouda, who also worked on the Rwanda Tribunal, while Aime Kilolo-Musamba heads the Defense Council (paid for by stipends out of Bemba’s frozen accounts).

Admittedly, we observed Bemba’s trial for less than an hour because there wasn’t much to take in because of the lack of audio. For anyone else who would like to see international human right law at work, I would suggest making sure that the case is “open” with audio.  Another piece of advice is to really take advantage of the expertise of the ICC employees at the front desk.  We chatted with an extremely helpful Ghanaian woman in charge of disseminating information on the court to visitors, and she was a trove of information that just can’t be found anywhere else.

One thought on “How to visit the International Criminal Court”

Follow African Society and Conflict on WordPress.com
Join 892 other subscribers

Join 892 other subscribers
Follow African Society and Conflict on WordPress.com