The AP just reported today that Nigerian officials will place $1 billion in their sovereign wealth fund (SWF) in the coming months to better invest some of the nation’s oil revenue. Okonjo and the Finance Ministry said the board managing the fund will be led by Mahey Rasheed, a board member at Nigeria’s First Bank PLC, and Uche Orji of UBS will be the fund’s managing director and CEO.

Nations use SWFs to invest in stocks or securities. The funds are essentially government-run investment portfolios that buy into anything from stocks and bonds to direct foreign investment. Nigerian authorities pushed for the creation of a SWF as a means to better save the billions of dollars the nation annually earns annual from oil revenues. These revenues currently go into the Excess Crude Account (ECA), which currently has about $7 billion in it but does do much in terms of investment.

Nebulous budgeting and corruption means much of the money is siphoned away in the current ECA, which will co-exist with the new SWF until the former has time to become more institutionalized. Some critics are saying that only investing $1 billion out of the $7 billion available is too little, but I think that is plenty for an uncharted venture in a country that already suffers from poor economic decision-making and opaque regulations. Unsurprisingly, state leaders have opposed the centralized SWF, saying more money should go to Nigerian states. After all, how can they skim off state shares of oil revenues if all that money is tied up in investments?

Ultimately, I don’t think changing where revenue is held will make much difference in a country that suffers from such profound structural and institutional impediments to economic development. 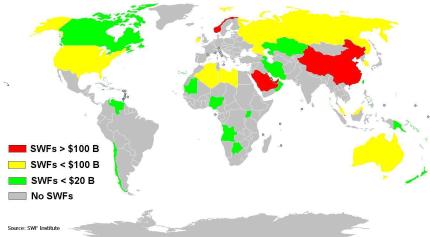