As mentioned in my previous two posts, last week’s start of the International Criminal Court‘s case against the former President of Cote d’Ivoire was historic.  He is the most high-profile defendant to date, and the first head of state to face charges.  Many Ivorians and members of the Ivorian diaspora are following the case closely, and emotionally.  According to those I spoke with on Tuesday, so many people hoped to attend Gbagbo’s pre-trial that there was a sign-up list online in order to fill the 75 seats in the public viewing gallery fairly.  In the 30 minutes before the start of proceedings, police escorted in groups of half a dozen people or so, and many hopeful attendees began to complain that police were using a different list than that online.  The ICC’s front desk employees had told me earlier that morning that it was first come first serve, and that whoever lined up soonest would enter.

However, there was no semblance of any orderly line, and people began to argue with others waiting to enter, and then some hostility began to be directed at the police. One tearful woman approached an escorted group as they passed through the ICC’s street entrances, yelling at them that they were criminals and murders.  Others began pushing their way to the front of the line, claiming a friend was saving them a place.  As police tried to gently usher people away from the buildings entrance, demonstrators who had been at the pro-Gbagbo rally across the street became agitated and screamed at the police officers.

Across the street from the Court, near the rally, perhaps a hundred riot police emerged from armored vehicles, although no riot ended up taking place.  From my vantage point, the Dutch police were impressive in their professionalism.  They remained exceedingly calm and respectful, even when Gbagbo supporters were not. I did not observe any excessive violence on the part of the police, and comparably speaking, I can’t imagine police in any other country showing such restraint. I noted that perhaps 1/3 of the riot officers were female, a much higher percentage than I think would be present in the U.S. in such a situation. 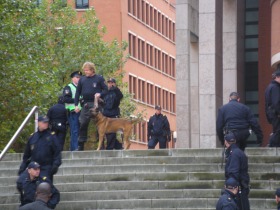 Right around the time when Gbagbo’s hearing was supposed to start, I looked across the street to see a young Ivorian man getting physical with another man, and then saw him take a full swing at a police officer when the officer tried to break up the fight.  As soon as he tried to punch that officer, any hope of getting in to the hearing was over for all of us.  The doors to the Court were immediately locked, police brought out German Shepherds, and then they began to close off the sidewalk.

Here are two clips I took of the “line” to enter the Court.  The first shows the arrest of the man with the yellow bag above, and the second clip is of Gbagbo supporters getting frustrated when they were not permitted entrance. See: