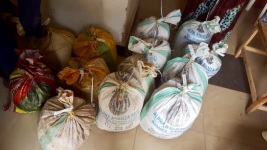 As part of increased gender mainstreaming in studies of governance, economic development, and the environment, scholars began examining the role of women in the mining industry in the late 1990s. Although mines may superficially appear chaotic, gender came to be understood as part of the complex social relations, norms, and activities therein. The first step in understanding the gender dynamics at play was to quantify the women working in ASMs across the world.

We now understand that women compose 50% of the ASM sector in Africa,[1], or up to 90% in gold, with most of these women concentrated in the lowest-paying positions. That is up to 15 million women who work in ways that are little understood, trying to pull their families out of poverty while providing products that are vital to the world’s technology. Current research on these women has two themes that approach the issue from different sides. The initial body of scholarship, anthropological in nature, identifies the ways women are socially and economically victimized by mining operations. They do an excellent job of describing women’s vulnerabilities but do not examine the role of formal and informal law in shaping those vulnerabilities. In reaction to this first line of inquiry, other researchers later created the second body of scholarship that focuses on women as agents in mining operations.

Women have long toiled in mines—it is only that their numbers are increasing with global shifts in economic realities at a time that there is new feminist scholarship on political ecology. Initial research highlighted the ways that extractive operations reinforced gender inequality and exploit women’s vulnerability in labor roles seen as antithetical to “women’s work.” Women’s contributions, both in and around mines, have remained invisible and underpaid or unpaid.[2] Most women initially turn to mining out of necessity when they don’t have male kin to look after them; it has low entry cost to start and then they don’t have advocates once they start.[3] These studies looked at unsafe labor conditions, various forms of violence, and income insecurity women in ASMs faced. Many of the social challenges female ASM workers navigated were entrenched in gender stereotypes: mining work is really sex work, women don’t want to work in mines because they want to stay beautiful, women who earn too much will leave their husbands, menstruation will make minerals disappear, etc. Additionally, the concept of mining is technical rather than social, buttressing its association with masculinity.

Gender inequality is a “structuring condition” of ASMs because gender barriers exist to accessing resources. The challenges ASM women overcome are varied. Because of childcare, they are less mobile than men so they can’t move from mine to mine, and mobility is key to forging a successful mining career. Some illegal mining is done at night for secrecy and thus is dangerous for women. Women work fewer hours in mines because of domestic responsibilities, limiting their access to higher income, networks, promotions, and making them seem unreliable. Women have lower average education levels, which impede their ability to move up the career ladder even at informal operations. In analyses of ASMs in central Africa, women were regularly barred from accessing semi-industrialized mines that offer fixed salaries and relegated to ASMs that pay per production.

Congolese women reported that it was only when traditional leaders realized how valuable minerals were that they suddenly declared that women couldn’t do mining for such cooperatives.  Their directives are adhered to by mining cooperatives, owned and operated by local male elites. They operate largely as companies, yet without a commensurate increase in responsibilities for labor rights, occupational safety and health, environmental management, and social welfare (each of which provides key gender entry points). Women have tried to work around male-dominated ASM cooperatives. Where barriers to other work are greatest, e.g. banning pregnant women from work, women seem to engage in petty mineral trading in greater numbers. However, this provides lower incomes than many other jobs and put traders at great risk of losses and debt than they otherwise face as ASM employees.

However, a contrasting school of scholarship focuses on women as agents in mining operations. Bashwira, et al. (2014) find that the focus on victimhood encourages policy that stimulates women’s departure from mining, overemphasizes inappropriate “alternative livelihoods” approaches, and marginalizes the promising multiple roles of women in artisanal mining, and how they benefit. Machacek and Duskova (2016) argue that ASMs improve women’s economic livelihoods in comparison to similar places without mining. Women find ways around gender barriers, with some even making pathways for accumulation. This is particularly helpful to the most vulnerable of women, such as widows and unwed mothers, who have few other income alternatives. A central tenant of this research is that if informal mines improve women’s livelihoods, then government-regulated mines in countries with progressive policies on gender, like Rwanda, would improve women’s status even further through gender mainstreaming efforts.

As an example of formalized government support, Rwanda has a large number of cooperatives. Women and girls could immensely benefit from inclusive, gender-sensitive group cooperatives and associations in the mining sector in particular, as the majority of miners are men.  Jennifer Hinton has found in her work that women can be empowered when they participate in village and savings and loans associations (VSLA) formed by job groupings at the mines. These women’s groups yield small loans, encourage active participation in meetings, and offer women a platform for voicing concerns to management. Female miners may be joined by women working outside the mines but who benefit from shops and restaurants benefitting from miners’ incomes.  In the DRC, provincial and local mining committees, comprised of local government leaders, security personnel, and NGOs regularly host stakeholder meetings that are a space for women to voice concerns or make important links to support organizations. Although it hasn’t been tested in extractive industries, general findings indicate that when women come together in the labor force, they are more likely to earn money that improves their household standing, socially and professionally network, even out gender-based information asymmetries, and even increase their rates of voting.

This binary of victim vs. agent described exists because of the paradoxes of women in mining. Mining communities are a masculine space in which male mining work determines all social and economic terrain for women, yet women ASM workers also present so many contradictions. Mining sullies women’s reputations but gives single mothers their financial escape hatch; women might earn too much and leave their husbands while the increased income benefits their social status and allows them to diversify into other economic activities, women who work in mines are “prostitutes” yet they economically benefit more than they would from moral virtue, etc. ASMs tend to be part of “interlocking markets” in which laborers give one day per week or an agreed-on amount of their production to landowners or permit holders in exchange for access to mining land, i.e. similar to sharecropping. This is also how laborers can access local credit lenders. Such informal agreements may at the same time favor women who are less likely to own land or access regulated bank loans perhaps. These agreements are best buttressed by formal and informal legalities.

[1] 40-50% is the common number cited across research starting from Hinton (2003). Most recently, Hilson, etc. (2018) argued that there are no reliable numbers of the exact number of women working at ASMs.

[2] Of studies of Uganda, DRC, and Rwanda, Rwanda had the smallest gender pay gap in mining. This is presumably because gender is a pillar of national policy and Rwanda is a highly regulated state.

[3] One study indicates female ASM workers tend to be unmarried or widowed at higher rates than the general female population around them, indicating that socioeconomic vulnerability drives women to seek out non-traditional employment in masculine spaces. In Uganda, some unwed female miners arrange for “shadow husbands” to protect them at work.